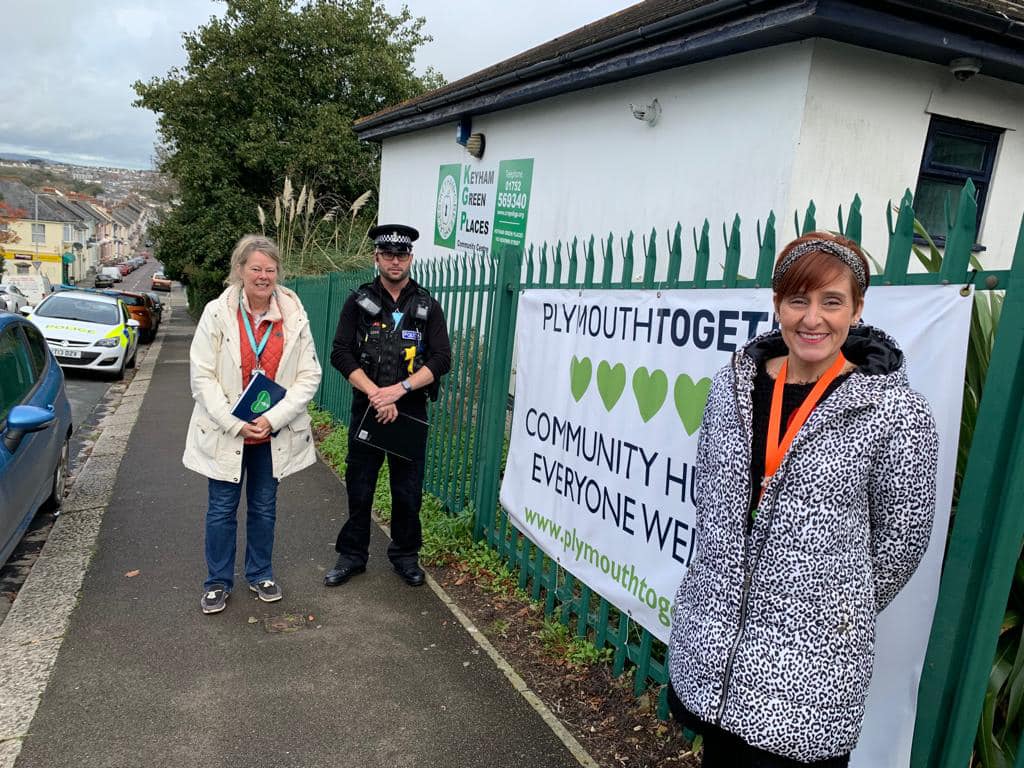 As part of the Safer Keyham funding for the area money has been allocated by the council for upgrading open public spaces and improving the local landscape by removing graffiti, landscaping and street clean-up.

Under the banner of ‘reclaiming public spaces’ a number of public consultation events have taken place in which residents were asked what improvements they would like to see in Keyham, Ford and the locality.

So far these have featured 12 pop-up events as part of the Community Voices initiative, which engaged more than 150 residents, and an Environmental Visual Audit (EVA) consisting of two walkabouts involving representatives from the community, police and specialists to see what sites needed particular improvements including better street lighting etc.

“The consultations have been very well organised,” said local resident Helen Powell, “And Debbie, Nicki and the volunteers at the Community Hub have done an amazing job with gathering in all the resources. The launch Community Voices event was very well attended and it was fantastic meeting all the professionals involved – it has been important to just talk and start the process of bringing the community together. I’ve also been to various drop-ins and it feels as though my feedback and my opinions do matter.”

The results of this community engagement are now being collated and will be used to inform final proposals for the area.

From the consultation it was clear that green spaces meant a lot to the community and, as a result, a Green Space Plan has been commissioned. Working with Green Minds (the council’s natural infrastructure team) and the community the plan aims to improve the parks in the Keyham area and focus on ‘uplifting’ the green spaces through such natural methods as rewilding, planting and cutting back as well as such safety measures as improving access lighting on pathways. Some work has already started with cut backs taking place in Marley and Linear Park.

“The vast majority of people in the area live in terraces with just a courtyard, so green spaces are particularly important to us,” said Helen. “But some of these spaces look pretty bare now and I would like to see more planting of trees. It would also be good to have a memorial, driven by the families and those impacted closely by what happened. Other suggestions I have include more activities for youngsters in the parks and better lighting – not just in some parks but on the streets. Keyham is an area with a lot of back lanes and having low lighting doesn’t make for community safety.”

You can get involved straight away by having your say on draft designs for green spaces in the area. The designs are featured here: Keyham Green Spaces Design Funded through the Safer Keyham Home Office Grant and Green Minds, these were created based on feedback received from a range of events and conversations with the Keyham community. We would like to ensure these draft designs do reflect the key priorities and needs of the community and to take part in the consultation visit: www.tinyurl.com/KeyhamGreenspacePlan The short survey only takes a few minutes to complete and will close on Monday, 7th February, 2022.

Improved lighting is another priority for Safer Keyham and work is well underway to understand where residents feel unsafe and which areas need improved lighting. A lighting scheme will be ready to be published soon.